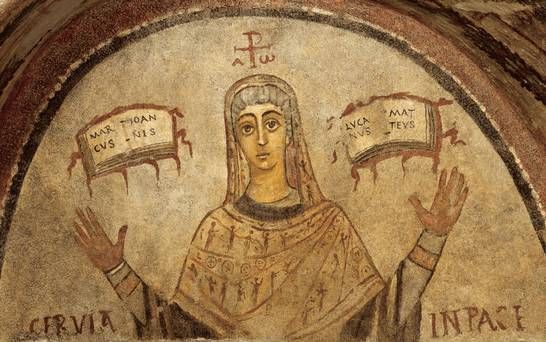 A fresco unearthed in an Italian catacomb suggests that women were acting as bishops in the early Christian church, academics claim.

The fifth century image of a woman named Cerula shows her surrounded by open, flaming Gospel books, symbolic of the role of a bishop. Academics said the discovery, in San Gennaro, Naples, was «incredibly significant» and proved that women held senior roles in the early church.

It could mean that millions will have to rethink the origins of their faith.

The revelations are made in Jesus’s Female Disciples: The New Evidence, due to be aired on Channel 4 next weekend. The programme also suggests Jesus had many more female disciples than previously thought.

Bible experts Helen Bond and Joan Taylor visited the catacomb in Naples, where, in the early third century, the Christians began to bury their dead and pave the walls with frescoes.

The wall paintings, hidden for 1,000 years, were rediscovered in 1971 and recently restored. Cerula was painted in the late fifth or early sixth century and is depicted in the praying position with the «chi-rho» symbol of Christ over her head. Crucially, she is surrounded by open volumes of all four gospels, suggesting she had real influence and responsibility.

Dr Ally Kateusz, a Christian art expert, told the show: «It’s really extraordinary because bishops were associated with the gospels. Bishops, and bishops only, had open gospel books placed over their heads during their ordination ritual.»

Dr Luca Badini, from the Wijngaards Institute for Catholic Research, said: «It was known that women bishops were preaching at that time but very little evidence exists of it. There are still some people who argue on the basis of tradition, stating that they can’t allow women to minister because it’s never been done before, but of course, that’s not true.»