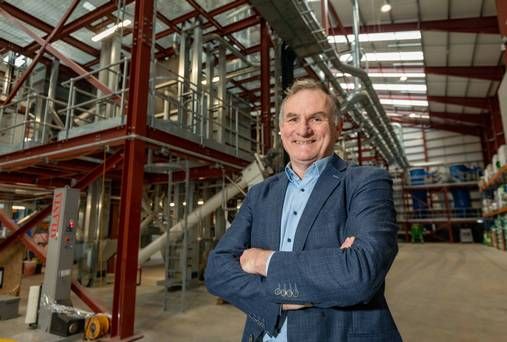 The huddled group of low buildings look like a typical Waterford farmyard. Once a store for oats and livestock, they have been converted into a suite of modern offices from which an expanding seed and animal nutrition business now operates. «We’re five generations now in the seed business,» says Arvum Group managing director Roy Power, waving over his shoulder at portraits of important-looking men from different eras.

The family business traces its roots all the way back through five generations of Powers to 1858. But its current custodian — who speaks with the passion and enthusiasm of a startup entrepreneur — is more interested in talking about the future.

Arvum has just struck a deal in New York that will double its €32m turnover and earn it $135m (€122m) over the next five years.

Power says that the pace of change in agriculture is so fast that opportunities for a company like Arvum — which operates a number of subsidiaries and joint ventures in both crops and seed, as well as in animal nutrition — are «limitless».

He notes: «The change is so rapid and the need for technology so high that it’s like running an IT company. It’s hard to get your head around the change in mobile phones and social media but actually, in our world of agriculture, it’s moving at an incredible pace as well.»

This pace is driven by one over-riding necessity: «We have the task of trying to feed the world. And we know that today’s technology will not feed the world by 2050. We’ve reached this milestone several times in terms of feeding the population of the world, and what happens is that new technology and new advancements in science extend our ability to feed the growing population.

«But the challenge we face now compared to before is that we need to do this in a sustainable way and we need to protect our environment.

«This challenge of increased production, increased efficiency, but in a sustainable way, is the area Arvum plays in.»

Get the latest news from the Farming Independent team 3 times a week.

The New York deal is a good example, says Power. An Arvum subsidiary, Specialist Nutrition, has for 20 years collected barley husks and other by-products from Irish breweries and distilleries run by companies such as Diageo, Irish Distillers and Teeling Whiskey. It then delivers this to local farmyards as feed without the need for the drinks manufacturers to first use an expensive drying process, as is the norm in other countries.

This caught the eye of a New York distillery, which asked Arvum to set up a similar system.

That initial tie-up led to the even bigger $135m deal with Attis Industries, which is converting a corn ethanol plant in New York into one of the world’s largest greentech campuses.

The Irish company will market and distribute 500,000 tonnes of feed annually into the state’s dairy farming sector from the campus.

«The biggest user of carbon fuels in any of these industries is the drying of the by-product and, by using our system, Attis is saving $2.3m on gas and dramatically reducing its carbon footprint,» says Power. «It is also a very big deal for us. It’s our first expansion out of Ireland. And it’s something that we’ve been very keen to do. Part of this was driven by Brexit and our analysis of our exposure. We’re talking to others about further expansion too.»

The history of the family business stretches back to 1858 when Power’s great, great grandfather, William Power, was working for a nursery in Waterford called Fennessys. He left the nursery to start his own business and got lucky when he won a contract to plant the gardens of the Malcolmson family, a wealthy family based in Portlaw.

Later, during the war, Power’s grandfather moved into the tobacco business and began growing the plant in Waterford. He also began importing clovers and grasses from New Zealand.

By the 1970s, the company had diversified far beyond its roots, into everything from chipboard manufacturing to construction. It ran into trouble and was broken up. Power’s father was given the nursery and seed business: «It was a tough time. Back to square one and my father had to do a lot of farming to get through.»

The younger Power was sent off to train as an accountant: «That was a mistake. I worked all my summers on research farms in France, Germany, England in plant breeding, and that’s what I love. My father said to me in the early days when I wanted to join the business that there was room for everyone as long as I created more room. So I set up our first research farm.»

That business has grown steadily and, five years ago, Arvum set up a joint venture with huge Danish co-operative DLF, a world leader in grass breeding and seed production.

«We decided that we’re better off with 50pc of a big cake rather than 100pc of a small cake. In Ireland, we have an advantage with our grass, and our beef and milk, our two biggest exports, are very reliant on the efficiency of that grass.»

Now the company tests thousands of different crosses to breed new grasses for use on Irish farms.

«So we might cross a lovely lush grass with a grass that grows early in the year and doesn’t mind low temperatures. The Danish company then carries out the genetic process and in year three, they send us back the seed. Then, here in Waterford, we grow what they send us in trial rounds on our research farm. We have some 5,000 varieties being tested here on an annual basis, for everything from sugar content to digestibility.»

As the seed business has grown, it has needed to invest to keep pace. Four years ago, it built a brand-new seed processing plant at Waterford port, investing more than €5m. It has allowed the firm to grow a hybrid seed rape export business, selling to Europe, Russia and Kazakhstan.

Power says: «There has been a huge technology drive in plant breeding and, in our seed business, we are always looking at the introduction of new varieties and crop species to the country. With new varieties, we get a higher yield, which obviously helps the profitability of farmers. But we also introduce varieties with more disease resistance, and that require less fungicides and pesticides.

«And the type of barley we’re producing is also better for further processing. For instance, if we can introduce a variety of barley that produces 1pc more alcohol in a distillery, that leads to greater efficiency in terms of the amount of land that’s required to produce a hectolitre of whiskey or beer.»

The company is also trialling grasses that use special bacteria to take nitrogen from the air, thereby reducing the need for fertiliser.

Climate change is also becoming a driver for this type of innovation. «We had an extreme drought scenario in Ireland the summer before last summer. We are supplying grass mixtures that are more resistant to drought,» Power says.

Arvum invests about 10pc of turnover into R&D each year, but the cost of much of the scientific research in the sector is huge and largely done by multinationals or state breeding institutes.

Power says: «We take what they do in terms of research and we bring it to Ireland and do the applied research here on our two research farms in Waterford. One is for products like wheat and barley, and the other is for grass breeding. We take the best of the international research and test it to see what is adaptable to our Irish climate. Over the years, we’ve pioneered and introduced different crops to Ireland, for example oil seed rape, beans and lentils. Most recently, we introduced a new hybrid barley which is significantly improving the yield of winter barley on Irish farms.»

The one innovation that the company cannot test or use in any way is genetic modification (GM), long a hugely controversial technology in Ireland.

«We adhere to a voluntary code of practice that says we do not grow even approved GM plants in Ireland,» says Power. But he believes Ireland is missing out because of this opposition.

«It’s unfortunate. If Ireland doesn’t have access to the latest plant technology, we’re going to fall behind. Remember, we’re an export nation. We export 95pc of our milk and 95pc of our beef.

«We need to be competitive with the world market if we’re going to sustain our agriculture, and if the rest of the world is taking advantage of the latest current technologies, and we are not, for sure, we are going to fall behind.»

Power blames the origins of the intense opposition to GM on the way it was originally launched by American multinational Monsanto.

«The public image was that Monsanto was simply doing it for their own gain and that it was world domination by a multinational. I think if they were to do it again, they would take a different view and it would be done a different way. But there’s 20 years of research all over the world on the safety of GM. So, for example, many people are now currently fully in favour of veganism and laboratory-produced meat. Yet there is no research that supports the safe consumption of laboratory-produced meat. The public have decided that this meat is safe but that GM isn’t. It’s emotional.»

Yet science is moving past GM, says Power: «I think that if we can move beyond GM and adopt some of the newer technologies that might be less controversial, then we should stay pace.

«But there is no doubt that GM technology has ensured that some competitors’ environments around the world are more efficient than we are.

«At the end of the day, we’ve got to work with the market we’ve got. But I would say that, for instance, if the organic movement had accepted GM, it would be very possible that with genetic breeding to ensure chemicals were not needed, we would have a lot more organic produce now.»

Just how the world is fed by 2050 remains an open question. But Power is determined that he — and whoever follows in his footsteps at Arvum — will be part of providing the answer.