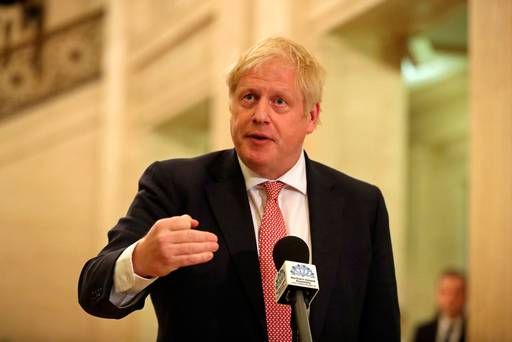 British Prime Minister Boris Johnson says there could be checks on goods coming into Northern Ireland if they are coming south of the border after Brexit.

Mr Johnson is in Belfast to meet with Northern parties after a deal was struck to restore the Stormont Assembly.

Taoiseach Leo Varadkar is also meeting with the parties along with Tánaiste Simon Coveney, who brokered the deal last week.

“Be in no doubt … I don’t foresee any circumstances whatsoever in which there will be any checks on goods going from Northern Ireland to Great Britain,» he said.

«The only circumstances in which you’d imagine the need for checks coming from Great Britain to Northern Ireland was is if those goods were going on to Ireland – and we had not secured, which I hope we will, a zero tariff, zero agreement with our friends and partners in the EU.»

Mr Johnson welcomed the return of the Northern Assembly and said it was now up to the parties to make it work.

He mimicked the utterance by former British Prime Minister Tony Blair who said about the Good Friday Agreement that: “I feel the hand of history upon our shoulders.”

However, the Prime Minister did not provide any figures for the amount of money to be provided by the British government to Northern Ireland.