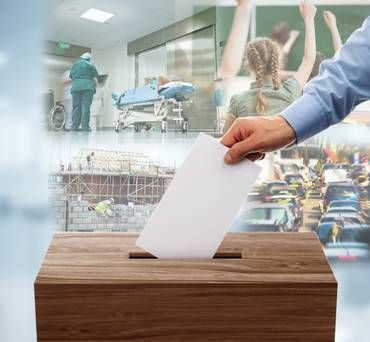 Over the coming weeks, we will hear conflicting arguments about the changes which have happened in the country over the past decade and the challenges we face over the coming years. Significant questions will be raised about the future direction of our society.

The answers voters give on February 8 will help define the strength of the Irish business model and living standards for the next generation.

There is no doubt from a business point of view that the past number of years have been transformative.

Since the lows of the financial crisis, there has clearly been a spectacular recovery in the economy.

This recovery has been driven by the private sector, which has created more than 425,000 net new jobs since 2012, with a record number of people now in work.

This growth is also clearly benefiting households. The economy is now close to full employment, with moderate inflation, and the strongest increases in real living standards since the late 1990s.

This growth dividend has increased after-tax household income in the economy by one quarter in just five years. This has been matched by no other economy in the developed world.

The success we have seen in our own economy has also brought with it a new set of challenges.

The world of business is changing. The drivers of business success are increasingly moving from tangible things like buildings, machinery and equipment to the intangible.

Intangible assets like companies’ brands, their patents, copyrights and their people are what is driving growth in the developed world.

To adapt to this new world of intangibility, global corporate tax rules have been going through a process of significant change.

Ireland has, thus far, been the big winner from these changes agreed by more than 130 countries at the OECD.

New rules announced in 2015 resulted in many of these intangible assets moving to companies’ European headquarters in Ireland.

This, in turn, has been followed by massive investment by companies in this country to match their profit with their substance. The results can be seen in the recent report of the latest IDA strategy.

The strategy, launched in 2015, overshot its net jobs targets by a staggering 95pc by 2019. While more change on global tax is coming, there is no sign yet that corporate Ireland is set to slow investment.

These dynamics have exacerbated a mismatch between private growth and public investment in Ireland, which began as capital budgets were slashed due to austerity.

Between 2010 and 2018, the private sector spent more than €170bn on capital investment in plant, machinery and buildings, while the State spent only €40bn on physical capital.

At the same time, the population has grown by 440,000 people and there are 120,000 extra children attending school.

The congestion and challenges this is causing are having a measurable impact on people’s quality of life.

This capacity challenge does not just extend to our physical infrastructure but also services.

In the past decade, we have seen the private sector deliver rapid improvements in people’s wealth — to the point that, today, Irish people hold more on deposit in our banks than they have out on loan.

But people still feel rationed in things which impact significantly on their daily lives — in searching for a place to live, in facing large school class sizes and in lacking access to hospital beds.

Of the 2.3 million in work, 0.35 million of those are in the public sector. This is broadly the same number as when the crash occurred.

This might seem like a strange thing for the head of the country’s largest business organisation to say, but it is possible that rather than the private sector getting too big, the Irish State is now proportionately too small.

There is a logic behind this from a corporate point of view. In the 20th century, business based itself wherever natural resources and transport links existed. Workers then flocked to those locations.

The growing intangibility of the global economy means that businesses now locate where the most skilled people live. People who can create the intangible assets on which the global economy turns. And those skilled people want to live somewhere which delivers not only a reasonable salary, but also an internationally competitive quality of life. Quality public infrastructure and services are key, not only to our personal quality of life, but to our overall national competitiveness.

This all requires someone to pay for it without blowing out the national coffers. It requires a reasonable conversation with voters about their expectations and how they can be responsibly met.

The next government has an opportunity to move on this by introducing a new, responsive model of economic and social dialogue that allows businesses and employees to play a meaningful role in policy formation through substantive engagement.

Not a return to the wage-setting of old, but real engagement on the quality-of-life challenges we will still all face after this election is over.

Danny McCoy is CEO of Ibec