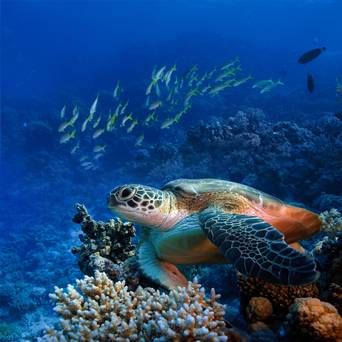 Half of all sea turtles have ingested plastic, a new study has found, as Greenpeace warns that the species could become extinct.

The report stated that once a turtle had consumed just 14 pieces of plastic, it had a 50pc chance of dying.

Research by the environmental group found that climate change is having a devastating impact on leatherback turtles, which have to travel farther to find food due to warming seas. The study found the number of eggs laid by the reptiles on beaches is about 100 times smaller now than it was in the 1990s.

Leatherback turtles migrate north after nesting to reach cooler waters to find their prey. They used to be able to travel short distances to find sufficient food, but as the oceans warm and currents change they are now being forced to go twice as far. The extra energy expended to find new feeding grounds is likely to reduce the number of eggs they lay each season, shrinking turtle numbers.

Will McCallum, of Greenpeace’s Protect the Oceans campaign, said: «Sea turtles survived the extinction of the dinosaurs, but they might not survive us.» (© Daily Telegraph, London)