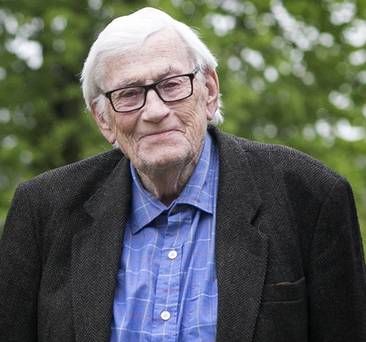 The former SDLP leader passed away at his home in Co Armagh, it was confirmed this evening.

«In the darkest days of conflict, when hope was in short supply, Seamus represented the fierce thirst for justice that ran through the SDLP and through communities that had lost so much to political violence.

«His passion for peace underpinned by truth, justice and reconciliation came from a lifetime as a proud son of Markethill where he was born, grew up and raised his own family. It didn’t matter who you were, where you worshipped or what your politics were, there was always help to be found at Seamus’ hearth.

«I joined the SDLP because of people like Seamus Mallon. His absolute opposition to the murder and maiming of our neighbours, his immense work to reform policing and deliver a new Police Service that could command the support of our entire community and his unrelenting commitment to making this a place we can all call home inspired so many young SDLP members,» Mr Eastwood said.

He said: «History will remember Seamus as an architect of the Good Friday Agreement, a committed peace builder and a tireless champion of an inclusive Ireland. He always opposed sectarianism and discrimination in any form.

«When others in his community advocated violence, Seamus had an unswerving commitment to constitutional nationalism. He was a peacemaker who put us on the path to reconciliation.»

Mr Mallon became involved in the SDLP in the late 1960s.

He went on to play a key role in the peace process, leading to the Good Friday Agreement in 1998.

Born in the village of Markethill in Co Armagh, his father was the headmaster of a local primary school.

He was a school principal himself when in 1973, he reluctantly agreed to replace an SDLP local election candidate who had pulled out at the last minute.

It turned out to be a life-changing decision, launching him on a career that included 22 years as deputy party leader under John Hume and three as deputy first minister of Northern Ireland.

His memoir A Shared Home Place, published last year, outlined how he grew up a Catholic in the largely Protestant village of Markethill, and he mixed freely with both communities and became «the sort of straight-talking Ulsterman whom unionists tend to trust».

He pays a warm tribute to his father (also a school principal), who told young Seamus: «The only weapons which should ever be used in this country are words. Guns never solve problems, they make them. Always remember that, son.»

He described himself as a religious man who «needs the concept of a God».

He joined the SDLP and became a councilor in 1973.

In 1979, he became the SDLP’s deputy leader and the party’s justice spokesman.

Tanaiste Simon Coveney said that Mr Mallon made «an extraordinary contribution» to Ireland.

He wrote on social media this evening: «Very sad to learn of passing of the great Seamus Mallon.

«He has made an extraordinary contribution to politics & people on this island.

«He was tough, intelligent and passionate, always working for peace and reconciliation. My sincere condolences to his family and friends.»

Labour leader Brendan Howlin also paid tribute saying that: «Together with John Hume, Seamus drove forward a vision of an Ireland freed from the spectre of violence, terror and discrimination. His life will be celebrated by Irish people everywhere who cherish the peace that Seamus dedicated his life to.»

Fianna Fail leader Micheál Martin said he was «saddened earlier today to learn of the death of my friend and long time political hero Seamus Mallon.»

He said that Seamus was, by any credible measure, «a truly great Irishman.»

«In the difficult and complex history of Northern Ireland, there are very few political leaders who emerge with an unblemished record of service that stands up to detailed scrutiny. Seamus Mallon is one of them.»

Mr Martin said that as an Assembly Member, Senator, MP and Deputy First Minister he was consistent and committed in his cause.

«Heedless to the threat to his life from all sides in the Northern conflict, he was fearless and ferocious in his opposition to violence and his commitment to building a shared society.»

«He understood the deepest dynamics of Irish history better than anyone I have ever met. We spoke many times over the years and I had the great privilege of spending some hours with him in his home in Markethill in April discussing political developments.»

«Seamus was a no-nonsense politician and individual. He called it as he saw it and he never compromised in his honesty, whether he was on the streets of Newry and Armagh or in the state rooms of Downing Street or the White House.»

Mr Martin said that Seamus Mallon was was deeply devoted to his late wife Gertrude and immensely proud of his daughter Orla.

«He was Republican in the truest sense of the word and his contribution to political life in this country is immeasurable. His death is the end of an era and I will miss his friendship and advice.»

Archbishop Eamon Martin said that «a person of global stature, Seamus was a county Armagh man through and through, and he gave his gifts unselfishly and tirelessly to serve the betterment of the whole community on this island, north and south.»

He said people sometimes speak of the «noble vocation of politics».

«Seamus was a shining example of someone who gave his life to that vocation and in the service of others. He will be remembered as a man of integrity and great courage who was not afraid to speak up or call it as it was – even at great personal risk. A man of strong faith, Seamus was calm, fair and principled, and always respectful of the rights of others.»

«To his dying day Seamus Mallon remained a man of hope for a brighter future — a shared and respectful future where we all experience a sense of belonging. A fitting tribute to his legacy would be a renewed effort by all our political leaders and by all of us to build that «shared home place» which was Seamus’ vision and lifelong project.»