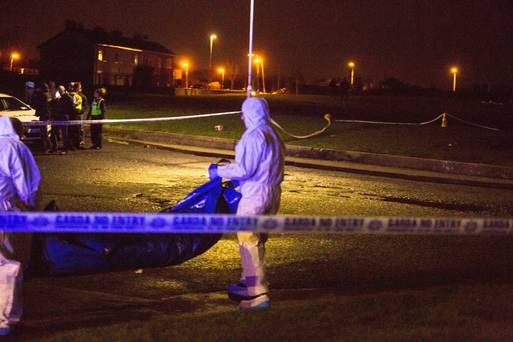 A major Garda investigation was due to begin this morning after dismembered body parts were discovered in north Dublin.

The gruesome find was made by a number of teenagers at around 10pm in Moatview Gardens, Coolock, last night.

The Garda press office confirmed that a number of human limbs had been recovered in a bag.

However, sources said that no head or torso was found with the remains.

Detectives are also trying to establish how the body parts were brought to the location where they were discovered.

Officers were last night in the process of verifying reports that they were dumped from a vehicle which then fled the scene.

The road where the find was made was cordoned off last night until the arrival of Garda forensic experts and the state pathologist this morning.

Investigators were due to carry out tests on the body parts this morning.

Gardaí will trawl through the missing person’s database, in particular more recent cases, as part of their investigation.

One source told the Irish Independent last night: «There is a lot of speculation going around about who these remains belong to, but it is simply too early to say.

«Further tests will be carried out in the morning before investigators can start to build a better understanding of who these body parts belonged to.»

A short time before the discovery, an unmarked detective car was rammed in the Coolock area during a pursuit of a suspect vehicle linked to a robbery.

After this incident, gardaí received reports of human remains being found nearby.

Initially officers believed this to be a tactic to divert them from the suspect vehicle, but after a Garda car was dispatched to Moatview Gardens the seriousness of the situation emerged.

A number of locals gathered in the area as news of the shocking discovery spread throughout the area last night.

One woman, who asked not to be identified, said: «I’m honestly not surprised in the slightest that something like this has happened here.

«Last year, a man from here was shot to death as children were walking home from school.

«The gangs here have no fear and wouldn’t hesitate to kill anyone who spoke out against them,» she added.