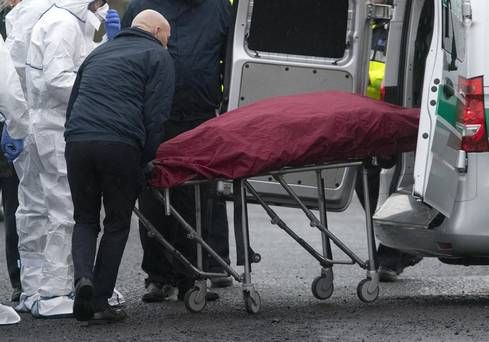 Gardai have this morning recovered human remains in a burnt out car in Dublin.

The discovery was made at around 1.30am in the Drumcondra area of the city. Fire services were called to a car on fire at Trinity Terrace off the Clonliffe Road and during the incident human remains were discovered in the boot of the burning car.

Detectives suspect they are those of a 17-year-old teenager feared dead after limbs were found in Coolock on Monday night.

The teenager was abducted, murdered and his body dismembered by one of the country’s most notorious criminal gangs had been formally warned by gardaí that his life was in danger days before he went missing.

Gardaí were last night searching for the head of the 17-year-old victim after body parts, including all his limbs and part of a torso, were discovered in a gruesome find in the Moatview area of Coolock on Monday night.

The chief suspect in the case is a notorious Dublin criminal involved in multiple feuds, including in Drogheda and Dublin.

He has been forced out of his Coolock base because of threats from rival local gangsters.

But in one of the sickest developments in Irish gangland history, the thug is suspected of organising the dumping of the teen’s mutilated body parts in Moatview as a grim warning to his rivals in the capital.

A massive search for the victim’s head was taking place last night at the compound of notorious gang boss Cornelius Price, who has close links to older associates of the murdered teenager.

“The information was that the head was to be given to Price as a warning not to mess with his rival or his gang,» a senior source said last night.

The Irish Independent is not revealing the identity of the Drogheda youth because he has not yet been formally identified by DNA.

A number of other searches were carried out yesterday by gardaí investigating the murder of the teenager, including at the home of a major Drogheda feud criminal.

The 24-year-old survived an attempt on his life when an innocent taxi driver was injured in a shooting on Monday evening.

Yesterday, the family of the murder victim were being comforted by friends at their home on the outskirts of the town as they waited for news.

Despite being just a few weeks short of his 18th birthday, the tragic young man was well known to gardaí and suspected of involvement in some of the multiple arson attacks on homes that have become such a feature of the gang warfare in Drogheda.

He was given a suspended four-month jail sentence last year for a terrifying campaign of intimidation and harassment against a local family and is also known to gardaí for minor drugs and road traffic offences.

«Whatever he did, he did not deserve a fate like what has happened to him — he is only a child after all, but some of these players involved in the feuding in Drogheda and Coolock are the most violent and brutal that this country has ever seen,» a senior source told the Irish Independent last night.

The gruesome find at the junction of Moatview Gardens and Drive was made by a 16-year-old local boy shortly before 10pm on Monday.

Sources say he and his friend were lighting a fire on the green when he came across a large sports bag that had been dumped there.

According to a local source, he picked up the bag with the intention of throwing it in the bonfire when a limb fell out of it.

Gardaí were then alerted by a 999 call but they were initially sceptical about the call because they believed it was an attempt to «divert» them from a robbery chase that was happening in the area.

«This is a common tactic by criminals — to call in one fake incident while a separate real live situation is ongoing, to divert Garda resources,» a senior source said.

But after a Garda car was dispatched to Moatview Gardens the seriousness of the situation emerged and the area was quickly sealed off.

Locals said the bag had apparently been thrown out of a car, which then sped away from the scene.

A preliminary post-mortem was carried out yesterday but no cause of death has been established.

Senior sources said that «significant damage» was observed on the victim’s hands which may have been carried out to distort fingerprint identification.

Detectives are investigating the role of a notorious 35-year-old Dublin criminal in the gruesome murder.

«He is the chief suspect for the attempted gun murder of Owen Maguire in July, 2018 which kicked off this feud and is very much aligned to the gang who are fighting with Maguire,» said a source.

One theory in the investigation is that the teenager who was abducted and murdered was targeted because one of his associates was blamed for the murder of Richie Carberry who was shot dead in Bettystown, Co Meath last November.