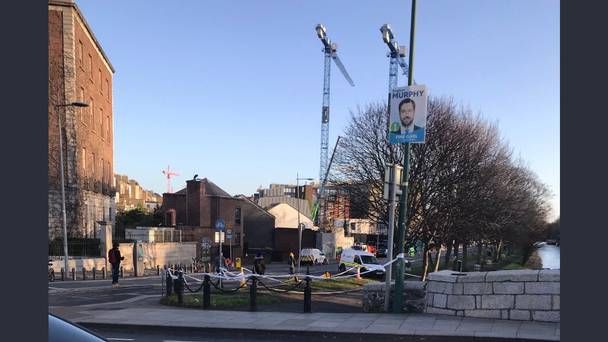 A homeless man has suffered life-changing injuries after the tent he was sleeping in was removed by an industrial vehicle during a clean-up operation.

The incident happened at the Wilton Terrace/Leeson Street junction along the Grand Canal in Dublin at 1pm yesterday afternoon.

Gardaí said that the man suffered life-changing injuries and remains in a serious but stable condition this morning.

It is understood the man is in his late 50s.

This photo perfectly encapsulates the ireland of 2020, @LeoVaradkar ‘s Ireland, cranes in the background for multi national offices, crime scene of a man bulldozed on to a truck by machinery while sleeping in a tent, & the minister for the #homeless with a disgusting grin on face pic.twitter.com/uxw1C5BO8D

In a statement, Dublin City Council said Waterways Ireland — the company responsible for maintenance along the canal  — were removing tents when the man was injured.

He was admitted to St Vincent’s University Hospital where he underwent surgery.

«An incident occurred yesterday involving a homeless man on the Grand Canal during a process where Waterways Ireland were removing tents that were placed in a precarious and dangerous location,» Dublin City Council said.

«An individual was injured during the process and was taken to hospital. The Dublin Regional Homeless Executive is currently liaising with the hospital and every support is being provided.

Taoiseach says the homeless man who sustained life-changing injuries after he was in a tent removed from Dublin’s Grand Canal is known to homeless services, had been offered accommodation in the past and will be offered again pic.twitter.com/9mfMjjU3pD

«Our thoughts are with the man at this time.

«The executive has been engaging with the individual for some time and accommodation remains available to him. Every action that is taken by state services is taken in the interest of health and safety of those individuals experiencing homelessness.»

«Somebody’s life could have been taken,» he told Independent.ie.

«Eviction notices were being issued to people living in tents along the canal, which is absolutely ludicrous. Appropriate checks clearly weren’t put in place to make sure someone wasn’t in the tent.»

Mr Flynn said with the election date now set for February 8, it is time for a new housing minister to be elected as Eoghan Murphy hasn’t done «an appropriate job».

«People are dying on the streets and the numbers in homelessness are increasing. We called for his [Eoghan Murphy’s] resignation numerous times and we need a change. He hasn’t done an appropriate job in terms of dealing with the homeless crisis.»

In a statement, Waterways Ireland said: «Waterways Ireland and Dublin City Council/Dublin Regional Homeless Executive work in co-operation to remove tents along the canals in Dublin where they have become a public safety hazard. On the 14th January an incident occurred at Leeson Street, on the Grand Canal.

«Our thoughts are very much with the individual who was injured.