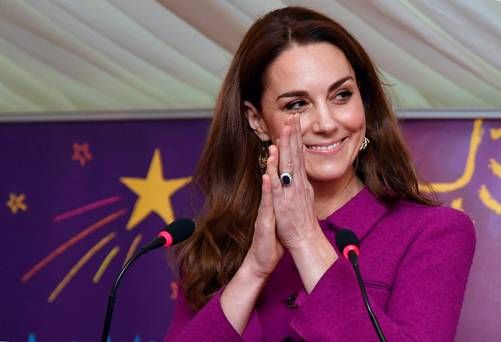 Once upon a time, back in the early noughties Kate Middleton was taunted relentlessly by tabloids as being deemed an unsuitable fit for the future heir to the British throne.

At the time, they were both studying at St Andrew’s University and Prince William was impossibly hunky and a literal poster boy for fans around the world.

American magazines documented his love life with the same enthusiasm as they had his late mother Princess Diana and British papers covered his every move more doggedly, before coming up with a compromise going forward. A deal was struck between Buckingham Palace and the relentless newspapers that William would be left alone and allowed to flourish privately during his time at university, before he was officially established as ‘fair game’ as he would be the rest of his adult life.

That didn’t stop a barrage of coverage around his girlfriend, justified because of her potential future as Queen of England and the mystery girl who ‘caught’ a future king.

She and her mother Carole Middleton were unfairly accused of being social climbers of the highest order, with rumours abound that Carole strategically set her daughter on a path that would encourage contact with William.

In advance of her 2011 wedding to William, the Daily Mail profiled her extraordinary rise with a particular focus on her mother, whom they described as “the daughter of a haulage contractor and builder and, through her mother, with deep, impoverished roots in the coal=mining North-East — has always been seen by friends as the engine of the family.”

The story of how they met is as famous as they are: he saw her walking in a college charity fashion show, wearing a sheer dress and the rest is history. They became close friends, then housemates, and then things became ‘official’.

By the time their engagement was announced in 2010 and being cruelly dubbed ‘Waity Katie’, whereas he said he intentionally waited so long to propose in order for her to truly understand what she was getting herself in for by saying yes.

«Divorce had dogged the royal family for too long. From the abdication of Edward VIII in 1936 that had nearly ruined the monarchy to the more recent divorces of Diana and Charles, as well as Prince Andrew and Sarah Ferguson, unhappy marriages threatened to seriously unhinge an otherwise solid establishment,” Katie Nicholl wrote in her book Kate: The Future Queen.

In the intervening years, stories were repeatedly published about her alleged desperation at landing a ring from her long-term love, with rumours that colleagues at her former job at Jigsaw mocked up a £20 note with her face on it with the words “HRH Katy” in 2007.

She and William split soon after — and she fled to Ireland with Carole for a brief spell to enjoy some downtime — but it was during this brief separation that her personality to shine. She went out to clubs with her sister Pippa and allowed herself to be photographed by the hordes of paparazzi and behaved like every other newly single woman in her twenties.

William, a natural introvert raised to be inherently cautious, and especially in public, reportedly hated it. It’s said he realised his mistake soon after their break up, but Kate exercised caution with reconciliation — and also, was the beginning of establishing her steely resolve she’s come associated with in 2020.

Her personality was still an enigma to most, but stories began circulating that she was feistier than previously thought, in particular when it came to ensuring equal partnership with her royal boyfriend. A now-famous story is often re-published as a reminder of this attribute, when a friend told Kate she was lucky to have landed William.

«He’s lucky to have me,» she responded.

«At the time I wasn’t very happy about it, but it actually made me a stronger person,” she said in their engagement interview in 2010. “You find out things about yourself that maybe you hadn’t realised. I think you can get quite consumed by a relationship when you are younger, and I really valued that time for me as well although I didn’t think it at the time.»

It was another three years before William popped the question, which still managed to surprise her as they were on a trip with friends in Kenya at the time.

After that announcement, her fate was sealed.

She would enjoy — and endure — a life of global stardom rarely experienced by anyone else in the world. She would be criticised and maligned in equal measure as every other member of The Firm, perhaps more so because of her ‘commoner’ background.

At the time, traditions were even more stringent than they are now and before she officially became HRH, she was given no official help in dealing with the attention by the palace, but only privately granted media training by William and his father Prince Charles.

In her case, the bad would eventually outweigh the good as she wields an incomparable global influence.

After her 2011 wedding in which she not only allowed, but encouraged, her sister Pippa to shine just as brightly, she took time away from duties in order to study up on what exactly it means to be a future queen.

Her biggest crime, perhaps a personality trait encouraged by her husband, was being ‘too boring’. Although she was impeccably dressed and consistently regarded by fashion editors and insiders as among the best dressed women in the world, her style became stale over time.

There were only so many coat dresses and fascinators to go around. And she was largely silent for the first few years of her life as a duchess.

She only began giving speeches in 2017, soon after Meghan Markle’s foray into the royal family, and has been widely praised the meaning behind her words; delicately balancing the apolitical and genuine.

Writer Malcolm Gladwell said that if you spend 10,000 hours at anything, you can become an expert at it. After nine years, she has well surpassed that mark and is widely regarded as the most popular royal in the family.

She’s seen as diligent, low key and enthusiastic with big ideas and ambitions for personal causes and clear, concise plans to execute them. Queen Elizabeth reportedly admires her for her “relatable” nature.

«The Queen is a fan,” a source told Vanity Fair earlier this year. “Kate is unflappable. Her mantra is very like the Queen’s keep calm and carry on approach in life, and she has the added benefit of making the Royal Family seem almost normal and in touch.”

As such, it stands to reason that Kate, after so many years of observing and learning from her own mistakes, would be steering the ship that is the only positive PR the royals have experienced over the last year: her role as mother to three adorable children.

Much has been made of the decision to parade her around hours after giving birth and public attitude has significantly changed from waiting with anticipation to meet eldest son Prince George in 2013, while Kate and William held their baby son — the future heir — with a bouncy blow-dry, full makeup and wedge heels, in stark contrast to literally every other woman in the world hours after they give birth.

By the time Prince Louis was born in 2017, there were calls to banish the tradition, something which the Duchess of Sussex struggled with after she gave birth to Archie last April — acknowledging the public interest — and taxpayer supported lifestyle, while also retaining some compassion.

For much of 2019, the Cambridges were uncharacteristically forward in putting their children in the spotlight. There were the standard appearances at Trooping the Colour and releasing family Christmas cards, but with Princess Charlotte’s first day of school, Kate’s Chelsea Garden Show installation and a more comfortable role in public life; all three children were encouraged to shine under the watchful eye of their parents.

While her brother-in-law Prince Harry and Meghan Markle wage a war against the tabloid media for coverage that they say is motivated by racism and sexism, Kate was heralded as being a pillar of continuity and an example of ‘how it should be done’, at least in the eyes of royal traditionalists.

Direct comparisons between her and Meghan are unfair, not only because of the advantage of time which Kate has on her side, but to deny at least some racially motivated coverage of Meghan would be factually incorrect.

Over the years, Kate has built a reliable roster of close friends, most of whom have been in the inner circle for decades; part of a carefully built circle of friends she and William share from their university days. Like most teenage sweethearts, their personal lives are completely intertwined and this, coupled with their royal responsibilities means their marriage is equal parts romance and business.

On Sunday, she reportedly began her celebrations with Rose Hanbury, a neighbour and close friend, William’s childhood best friend Thomas van Straubenzee and his fiancée Lucy Lanigan-O’Keeffe, a teacher at Thomas’s Battersea, where both Charlotte and George attend (who hails from Thomastown, Co Kilkenny.).

Always the dutiful wife (and granddaughter-in-law), the celebrations began with church at Sandringham on Queen Elizabeth’s private Norfolk estate, before decamping to the family home Amner Hall.

For her actual birthday, she will celebrate privately with her family, especially now that her siblings Pippa and James and her parents have returned from an extensive New Year break in St Barth’s.

2019 was undoubtedly her most successful year in the public and although it came at the cost of the Sussexes, there is cause to celebrate her future within the monarchy. 38 isn’t exactly a milestone age, but the last 12 months have been momentous in her growth as duchess.

“Kate is in her element right now, she’s really stuck at it and persevered with what she believes in,” a source told PEOPLE.

And it’s hard to disagree with that logic.