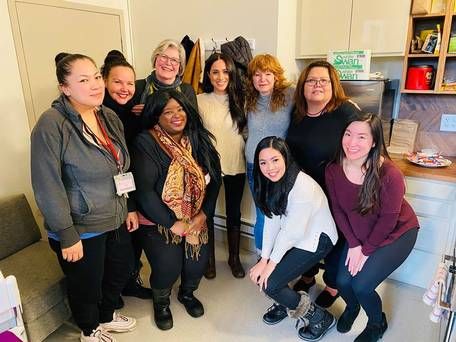 Britain’s Duchess of Sussex has been seen for just the second time since the royal crisis began at the Downtown Eastside Women’s Centre in Vancouver discussing «issues affecting women in the community».

The shelter posted a photograph on its Facebook page of Meghan at the centre of a group of eight women, with the caption «Look who we had tea with today!

«The Duchess of Sussex, Meghan Markle, visited us today to discuss issues affecting women in the community.»

Meghan did not join the royal summit at Sandringham with the Queen and senior royals by phone earlier, instead relying on her husband to put forward their case for a new independent life.

A source told the PA news agency: «In the end, the Sussexes decided that it wasn’t necessary for the duchess to join.»

After the summit the Queen issued a statement which sanctioned the couple’s new «independent life» away from full-time royal duties and she said they would begin a transition period living in the UK and Canada.

The duchess is reportedly the driving force behind the move.

Harry and Meghan spent six weeks over the festive period based in the Canadian province of British Columbia staying at an exclusive property on Vancouver Island.

The duchess, a former actress, worked in Toronto during her time starring in the popular US drama Suits, and knows the country well having lived there for seven years.