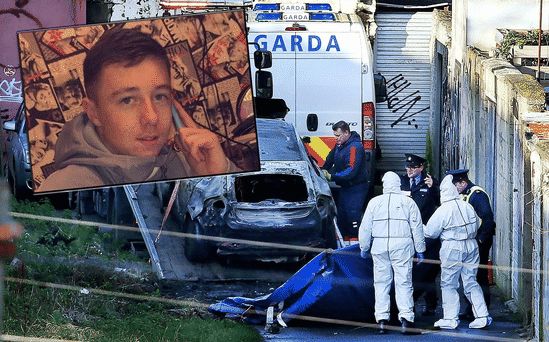 Gardaí were last night searching a house in Co Louth where they believe a tragic 17-year-old boy was murdered in a «savage attack» before his body parts were dumped across Dublin’s northside.

DNA testing yesterday confirmed the human limbs found in a holdall dumped in an estate in Coolock on Monday night were those of Keane Mulready-Woods, who had been missing since last Sunday.

A major manhunt is continuing for the teenager’s killers after his severed head was discovered in a burnt-out stolen car at 1.30am yesterday in the Drumcondra area.

Last night, detectives had not found the chief suspect in the case — a hitman who had close links to Richie Carberry (39), who was shot dead in Bettystown, Co Meath, in November.

The north Dublin criminal is considered a «psychopath» and «serial killer» by gardaí.

One line in the investigation is that the Drogheda teenager was abducted, murdered and mutilated because one of his associates was blamed for Carberry’s murder.

It is further claimed that threats were made to the Dublin criminal about children known to him that led to the gruesome plot to murder the 17-year-old boy.

In a further development, a video of a balaclava-wearing thug — believed to be the son of one of the chief suspect’s other murder victims — was posted online last night. In the chilling video, the thug, dressed all in black, can be seen pointing a gun at the camera and threatening to kill the notorious hitman.

A house in the Rathmullen Park area of Drogheda remained sealed off last night with senior sources revealing that «is very much the most likely» location where Keane was murdered.

Detectives are investigating the probability that the teenager may have been brought to the location and attacked there. Blood has been found at the property, the Irish Independent can reveal.

Senior sources have revealed there was no sign of trauma on the victim’s head, which was found in the boot of a burning car on a laneway at Trinity Terrace off Clonliffe Avenue, Dublin.

On Monday night, the teen’s limbs were found dumped in a large sports bag in Coolock.

The grim discovery was made by children in the Moatview area.

Most of the victim’s torso has not yet been recovered but gardaí believe it is that part of his body that he suffered fatal wounds.

Hours before the grim discovery in Coolock, gardaí had received intelligence that Keane had been murdered and that his body had been mutilated by sick gang rivals.

There had even been reports that his head was to be delivered to gang boss Cornelius Price, who is the bitter rival of the 35-year-old chief suspect in the case, on Monday as a «major warning».

The last known contact Keane is known to have made with his family is a phone call made to a woman at 7pm on Sunday. He was reported missing by his family on Monday morning and shortly after gardaí received intelligence that he had been murdered.

There have been no arrests so far but extensive searches were being carried out in Drogheda yesterday as the investigation into the murder continued.

Confirming the human remains were those of Keane, Drogheda’s Garda Chief Christy Mangan said: «This is a brutal and savage attack on a child — it is completely unacceptable in any normal democratic society.

«It is important to remember that Keane was a child, a young boy trying to find his way of life. He has now lost his life and his family have lost their loving son.

«We’re there to protect and serve the public, but there are a number of groups who are interested in controlling certain parts of society and their own lifestyles through drugs and intimidation.

«We’re not going to allow that to happen.

«We’re there to protect the people of Drogheda and will certainly do that in a very robust fashion.»

Last night, senior sources said Keane had «got in way above his head» in relation to his criminal associations.

«He was only due to turn 18 next month but his criminal conduct was far more serious than you would expect of anyone that age,» a senior source said.

He was given a suspended four-month jail sentence last year at the local district court for a terrifying campaign of intimidation and harassment against a local family and is also known to gardaí for minor drugs and road traffic offences.

Michael Router, Auxiliary Bishop of the Archdiocese of Armagh, which includes Drogheda, said: «There are people living amongst us with blood on their hands.»