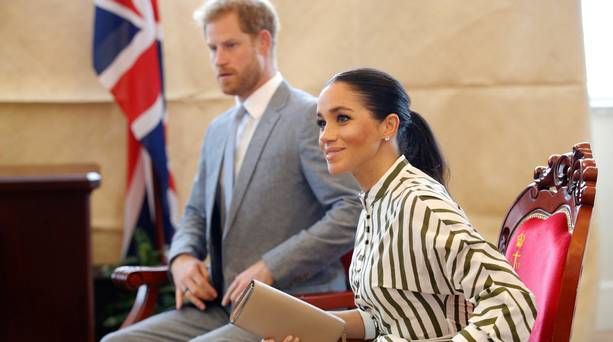 After the ‘Sandringham Summit’, during which all the senior royal family hashed out the early stages of a workable exit for Meghan Markle and Prince Harry, the next week will be spent finalising as much as possible to ensure the “period of transition” is as smooth as possible.

Harry arrived at his grandmother’s estate in Norfolk two hours early in order to appeal to her on an emotional level and explain his feelings, before the official meeting began with the rest of their family, and their private secretaries. Meghan was originally expected to dial in from Canada, but a spokesperson said today: “In the end, the Sussexes decided that it wasn’t necessary for the Duchess to join.”

Queen Elizabeth’s statement said she is reluctantly supportive of her grandson’s decision, highlighting the difference between “my family” and “his family” throughout. “Although we would have preferred them to remain full-time working Members of the Royal Family, we respect and understand their wish to live a more independent life as a family while remaining a valued part of my family,» the British monarch said.

She added: «These are complex matters for my family to resolve, and there is some more work to be done, but I have asked for final decisions to be reached in the coming days.»
Among those complex matters is who will pay for their extensive security costs. The Metropolitan Police provides personal security for the royals and Harry, Meghan and Archie’s protection is estimated to cost £1m annually.

Canadian Prime Minister Justin Trudeau said their move still needed to be finalised, speaking in vague terms about the details that need ironing out; in particular, whether or not the Canadian taxpayers will be on the hook for security costs and “what level of engagement they choose to have.”

He explained: “I think most Canadians are very supportive of having royals be here, but how that looks and what kind of costs are involved, there are still lots of discussions to have.”

Queen Elizabeth is head of state for Canada (as well as Australia and New Zealand) and while it’s more of a ceremonial role, the decision to move to a Commonwealth country was a sensible one by the Sussexes.

Meghan is already back in Canada, having flown to her new base — the country where she called home for seven years — last week. She and Harry made a brief return to the UK and left their son Archie in the care of her best friend Jessica Mulroney and his nanny, whom they declined to identify in order to protect her privacy, and is back in British Columbia. Harry is expected to return within days after the ‘Sandringham Summit’, during which he came to an agreement with his grandmother and other senior royals.

The ‘big four’ won’t be sitting down again and will instead be communicating over phone and email, although the queen still prefers communicating via letters.

Once they settle in Canada, at least temporarily, there are the inevitable questions about finances, education opportunities for Archie when the time comes and then there’s the question of immigration and tax. Both will be treated the same as any other citizen attempting full-time residency and subject to the taxes imposed, although it’s expected they will divide their time between Canada, Britain and some time in Los Angeles, to protect themselves from residential taxes that come with each country.

“There are no provisions in the Citizenship Act that confer Canadian citizenship status to members of the royal family,” Immigration, Refugees and Citizenship Canada, a government department, said in a statement.

“In order to become legal permanent residents of Canada, they would need to apply through our normal immigration processes. However, members of the royal family are not required to seek authorisation to come to and stay in Canada as visitors.”

Although Harry and William put on a show of unity on Monday, condemning a newspaper for claiming Harry was “bullied” out of his role by his older brother, citing the language as “potentially damaging” and contradictory to the positive mental health practices hey both endorse; their brotherly beyond is deeply fractured.

Harry’s close friend, ITV journalist Tom Bradby, detailed in a piece that words were exchanged before Harry and Meghan’s 2018 wedding that deeply damaged their relationship. It’s believed that Meghan and Kate Middleton do not get along and Harry feels hurt that his brother and sister-in-law did not make enough of an effort to welcome his wife into the fold from the very beginning.

“Really damaging things were said and done. The atmosphere soured hard and early, but few meaningful attempts were made by anyone to heal the wounds, he wrote in a 1,600-word piece in The Times.

“My understanding is that William did try, but the impression I have, for the moment at least, is that things have gone too far to be retrieved.”

It was in a now-infamous interview with Bradby last year that Harry said he and his brother are on “different paths”, confirming the rumours following the family for months that a rift had developed between all parties in Buckingham Palace.

It’s believed that Harry’s family see supporting his decision as a means to not only protect his mental health and respect his desire for privacy, but as an opportunity to ensure their personal relationships are not fractured beyond repair and can eventually be improved.

Queen Elizabeth confirmed the initial statement which said they intend to become “financially independent”, but how they do so is a delicate balancing act. Despite trademarking Sussex Royal on over 100 items — from pencils to socks and educational initiatives — they will still be expected to adhere to certain ethical obligations and not seen to be cashing in on their royal name. And if they make the decision to remove their HRH titles, an option which is now on the table in order to ensure a clean break at a quicker pace, then the trademark is essentially worthless.

Sussex Royal is not worth very much if it’s not the genuine article, even for the most diehard royal fans who want to cosy up in a pair of socks with their names on it.

Prince Charles is said to have spent a significant amount of his personal fortune on his youngest son, covering the cost of his wedding and the renovations on their home, Frogmore Cottage in Windsor. Harry relies on the £2.3m stipend he receives from his father’s Duchy of Cornwall, which he uses for “family bills” and it’s believed he is hoping to still have access to that, at least in the short term. “He doesn’t have unlimited resources. Harry needs to know that,” a source told the Daily Mail, indicating that Charles identifies the complexities of their finances, even what is considered personal.

He inherited an estimated £20m from his late mother’s estate and as ‘Spencer money’, it’s considered private money. The trust issues him an annual £450,000, and the brothers also split their mother’s extensive jewellery collection.

The Queen Mother left him an additional £6m in order to “compensate for not becoming sovereign.” He and William will split another £8m of her trust when they turn 40, as will her other great-grandchildren.

Meanwhile, Meghan retained the employment of her high-powered Hollywood agent and business manager even after she became a royal, who are reportedly brokering deals on her behalf to future-proof their finances.