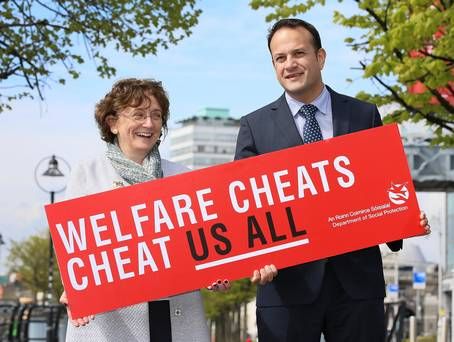 The much-criticised publicity campaign, which cost almost €164,000, was launched when the Taoiseach was social protection minister.

The latest figures have been provided to the Dáil’s Public Accounts Committee (PAC) by the Department of Social Protection.

They show more than 7,700 allegations of suspected fraud were made to the department while the media campaign ran between April and the end of July 2017.

Of these, 2,071 reports didn’t contain relevant or enough information.

A total of 4,840 cases were examined and 738 claim reviews or investigations resulted.

According to department figures, overpayment assessments were valued at just over €915,000 and of that, more than €300,000 was repaid by the end of November 2019.

The department estimates «overpayments and control savings» totalling more than €7m. Control savings are the value of prevented expenditure that would have occurred if investigations had not been carried out.

A Department of Social Protection spokesperson said it will continue to recover overpayment sums «as quickly as possible» depending on individual circumstances.

A statement added: «The monies recovered to date represent double the amount originally spent on the campaign and this will increase as further recoveries are made in the future.»

There have been claims by the Opposition that the ‘Welfare Cheats’ campaign sensationalised the level of fraud in the system.

Mr Varadkar defended the campaign at the time, insisting «the vast majority of people understand why it makes sense».

He said it was important «the budget I have goes to people who are entitled to it».

The department’s most senior official later conceded the use of the term ‘welfare cheats’ was a mistake.

Secretary general John McKeon said the campaign — which pre-dated his time at the department — was challenged on the issue at a meeting of the Public Accounts Committee (PAC). He blamed the media for hyping fraud levels but also said the department had learned from feedback criticising the messaging that «put the word cheat beside the word welfare».

«In retrospect I believe it was a mistake,» he said.

The latest correspondence to the PAC says the campaign was designed to «promote discussion on the topic of social welfare fraud and challenge the perceptions of those who see it as a victimless crime».

Current minister Regina Doherty said at the weekend the number of people who contacted her department with tip-offs about individuals allegedly claiming welfare payments fraudulently had increased in recent years.

She told the ‘Sunday Independent’: «You know what Irish people are like, we don’t like snitching on each other, for want of a better word, and that’s not what I’m asking people to do.»

However, she did urge people to «reach out» on the issue, saying she had heard about one Dublin man who had been unemployed for 23 years and when an inspection team contacted him he «miraculously» got a job.