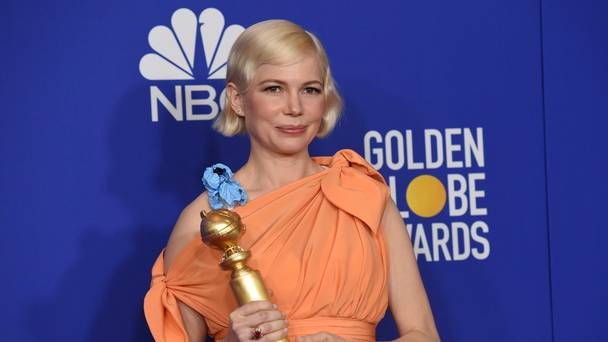 Michelle Williams gave an impassioned speech about women’s right to choose as she collected a Golden Globe.

The actress, who is pregnant with her second child, called on women to vote in “their own self-interest”.

Picking up her prize for best performance by an actress in a limited series for Fosse/Verdon she said: “I am grateful to live in a moment in our society where choice exists, because as girls and women, things can happen to our bodies that are not our choice.”

She added: “I’ve tried my very best to live a life of my own making, not just a series of events that happened to me, but one that I could stand back and look at and recognise my handwriting all over, sometimes messy and scrawling, sometimes careful and precise, but one that I carved with my own hand.

“I wouldn’t have been able to do this without employing a woman’s right to choose, to choose when to have my children, and with whom.

“When I felt supported and able to balance our lives, knowing as all mothers know that the scales must and will tip towards our children.

“Now, I know my choices might look different than yours. But thank God, or whomever you pray to, that we live in a country founded on the principle that I am free to live by my faith and you are free to live by yours.

“It’s what men have been doing for years, which is why the world looks so much like them. But don’t forget, we are the largest voting body in this country. Let’s make it look more like us.”

Williams is already a mother to daughter Matilda, who she shared with the late actor Heath Ledger, and is engaged to Hamilton director Thomas Kail, with whom she is expecting her second child.

She concluded her speech by mentioning them, saying: “Tommy and Matilda, I can’t wait to come home to you.”

What a speech by #MichelleWilliams! Thank you for being a champion of women, you are an inspiration ���� #GoldenGIobes https://t.co/J72vlv9Si0

Her speech was shared on Twitter by the gender equality group Time’s Up and  Reese Witherspoon later tweeted: “What a speech by #MichelleWilliams! Thank you for being a champion of women, you are an inspiration.”

Williams and Kail made their red carpet debut earlier in the evening and the camera showed the director and her best friend Busy Philipps cheering her on after her speech.