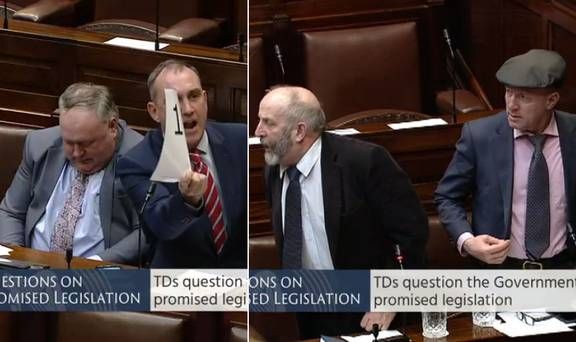 As Dáil shouting matches go it was in the Premier League – but you’d be forgiven for not having a clue what was being said.

The Oireachtas descended into chaos earlier today as TDs rowed over who would get to ask Taoiseach Leo Varadkar questions.

Fianna Fáil’s Marc McSharry complained that the Healy Rae brothers (Danny and Michael), along with fellow Independent Mattie McGrath are constantly jumping to the top of the queue.

What followed was an exchange that involved Kofi Annan, Ban Ki-moon, Strictly Come Dancing, a trip to Kilgarvan and Christ himself.

Here is a full transcript of the debate that led Leas-Cheann Comhairle Pat ‘The Cope’ Gallagher to suspend proceedings until all sides calmed down:

I go to No. 1,  Danny Healy-Rae, on promised legislation or the programme for Government.

In the programme for Government, there is a promise to protect farmers’ incomes and payments.  Indeed, the promise covered cases in which payments were held up for one reason or another and a consensus was arrived that two thirds of outstanding payments would be made until the problems were sorted out.  However, where commonage was burned in Kerry, some farmers received no payments at all for Christmas.  They have no other income.  In the fullness of time, they will win their battle because their commonage was burned from outside.  They had nothing to do with the burning of the commonage.  I ask the Taoiseach and the Minister for Agriculture, Food and the Marine to intervene to ensure these farmers get fair play.  It is wrong to take their whole payment from them.  They were told they would get payments in 2018.  That is totally wrong.

We will let the Taoiseach answer.

On the same issue——

Does he have a card?

Of course, I have.

Show it to me.

It is the same issue.

Oh, stop. This is making a joke out of it altogether.  It is every ten minutes.

We have 44 Deputies here but we have Kofi Annan McGrath and Ban Ki-moon Healy-Rae up every day, undermining this country’s——

There are either 168 Deputies here or there are not.

Do not call us names.  We were elected here in our own names and we will take no rubbish from MacSharry.

When  MacSharry was looking for Seanad votes, he was damn glad to come to Kilgarvan.

MacSharry’s party is here supporting the Government and saying it has nothing to do with it.

This is a joke.  It is «Strictly Come Dancing» and they are the half-time performers.

I am going to move on.   MacSharry, control yourself.

For Christ’s sake, control them.  The Business Committee of the House is a joke.

Deputies, I will take action if it is necessary.

I am going to set up the Sligo-Leitrim technical group to get a few words in here; myself and Deputies Tony McLoughlin, Martin Kenny and Eamon Scanlon.

Listen,  MacSharry.  Everyone one is circumventing the regulations.

This is a disgrace.

I will suspend the House.

Suspend it if you like.  It may as well be suspended.  The same people have the floor all the time.

MacSharry will not speak to the Chair like that.

I cannot speak to anybody.

You will not speak to the Chair in that way.  I will suspend the House for five minutes.