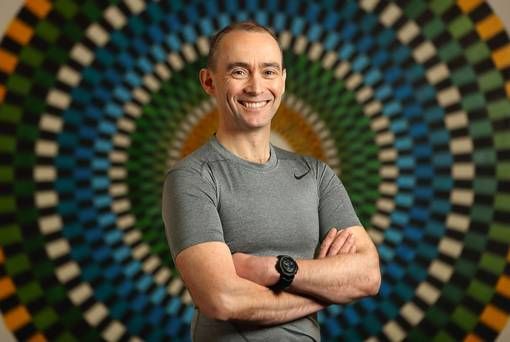 What do Idris Elba, Cameron Diaz, Sofia Vergara, Gwyneth Paltrow and Liam Gallagher all have in common? At 47, they are in the full bloom of their professional or personal happiness: Diaz has just welcomed a baby girl, Idris is in the frame to take over as James Bond, Liam is getting married and Gwyneth… well, Gwyneth is just happy making dubiously scented candles.

Closer to home, 46-year-old Sinead O’Carroll is cutting quite the sexy swathe on Dancing With The Stars, more than holding her own against 24-year-old Yewande Biala and 25-year-old Grainne Gallanagh. Yet according to new research, these fortysomethings should be hitting the nadir of middle age misery. A new study has shed light on the ‘happiness curve’, which is U-shaped.

Dartmouth College Professor David Blanchflower studied data across 132 countries to measure the relationship between well-being and age. Those in developed nations hit their emotional lowest at 47.2

Several variables are thought to be at play in the current social climate. Many people of this age find themselves members of the ‘sandwich’ generation, looking after both young families and elderly family members with health challenges.

Dubliner Sarah Power (46) is caring for both of her parents and makes references to the ‘panini generation’: «With old parents pushing on one side and really young families pushing on the other, people are getting the s**t squeezed out of them,» she says. «It’s unbelievably interesting how many people of my age are in a similar situation.»

A year ago, Power was a manager in a large IT organisation, but the responsibility of caring for parents, raising children and maintaining a demanding job soon took a toll. Luckily, the company has a carers’ policy, enabling her to take a career break and become a full-time carer to her mother, who has Alzheimer’s.

«I thought I’d have it all together in my late 40s,» she admits. «The kids would be slightly older and wouldn’t be quite as needy as they were as very young children, and could make their own breakfast and get themselves to bed. We would be halfway through the mortgage and I was looking forward to having some big holidays — the type of ones you put off when you have young children and big mortgage repayments. I thought it would be plain sailing by then, but that’s the point in life when things started to go downhill.»

Birr-based psychotherapist Stella O’Malley (49) sees plenty of people in their late 40s in her clinic, and has also pinpointed other factors that might contribute to ‘midlife misery’.

«I think all your decisions made in your 20s or 30s ‘come in’ as such, whether you decided to stay home or work,» she observes. «You could always change certain decisons in your 20s and 30s, but the late 40s is when you start to think this is where you’re going to live from here on out.

«For the sandwich generation, there are women going through menopause, who are living with children often going through a hormonal adolescence,» she adds. «It’s an extraordinarily bad combination and neither has any real sense of the other.»

Professionally, many fortysomethings feel they are approaching a stage where they might be able to take their foot off the pedal for a while after putting in decades of effort. Yet many find that this time never materialises. Worse again, they need to keep up with ambitious, technologically savvy youngsters in the workplace.

«You’ve spent all this effort trying to get up the career ladder and after that, you’re desperately trying to keep yourself there,» O’Malley notes. «You’re also likely to start thinking, ‘why actually am I doing this work?’. In your 30s, the career ladder seemed so important to get on, but as Fay Weldon says, most people have jobs, not careers. It can be a very deep existential question to ask yourself.»

For many fortysomething women too, not least those reaching peri-menopause or menopause, there can be an undeniable sense of energy, allure and conventional attractiveness ebbing away.

«I’ve noticed that myself,» smiles O’Malley. «I’ve always been confident on my own self, but I’ve noticed in the last while that I’m perhaps not as attractive to men as I once was, which comes as a bit of a shock. But then, I’m at ease with this because I had my day in the sun and I certainly enjoyed myself. I think if you didn’t enjoy your youth, you’re more likely to feel depressed about having missed your time.

«At this point in life, the general perception can often be ‘is this it?’ although, it doesn’t have to be the reality.»

On this last point, novelist Carmel Harrington (49) is very much in agreement. She began writing at 40, and started having the first of her children at 39.

«I think it [the research findings] couldn’t be further from the truth,» she says. «Personally and professionally, everything came together for me since I turned 40, and have only gotten better. I’m at peace with who I am and where I want to go, where I want to be and how I want to get there. I had a lot more self-doubt in my 20s and 30s. And, of course, I’m firmly of the attitude that you’re never too old to chase your dream.»

Carmel, whose next novel My Pear-Shaped Life is released in April, adds: «I look very different now than I did 10 or 20 years ago and, of course, I’d prefer to have the figure I had years ago, but you can’t give birth to two children and not end up with a different body shape.

«It can sometimes be hard for women to come to terms with hairs on the chin and the joy that the peri-menopause brings, but I’m quite accepting of it all. What’s the point in fighting them? I’ve had family members who have faced cancer battles and, thankfully, they’ve come out the other side, but that sort of situation really brings about a turning of the mindset.»

Similarly, Mitch Bohan, who co-runs the Infinity Hot Yoga studio in Maynooth, believes that certain life experiences have taught him that reaching midlife is a privilege.

A former Army officer, Bohan’s good friend Derek died in action while on a tour of duty, aged 33. It gave him a whole new perspective on life.

«Derek would be 49, same age as I am now, and it really taught me that getting to stick around on the planet is a gift,» he explains.

At 45, Bohan decided on a major career pivot: he left the Army that he had joined at 17 and after returning to education, decided to open his own business. With the yoga studio a resounding success, he says he couldn’t be happier.

«Happiness is a state of mind and by its definition, it’s an individual thing,» he observes. «If someone had a strict timeline in their head about being at a certain place by 25 or 35, the chances of that working out are minimal. If you measure your success by this artificial timeline, you’ll always be thinking yourself unhappy.

«I don’t give a sh*te what people think of me, but I’ve been that way since I was 21,» Bohan smiles. «You do become a little more aware of your emotional intelligence, but that comes about from being on the planet a little longer.»

The good news is that, according to Blanchflower’s research, people experience an uptick in happiness after this supposed mid-life nadir.

«I’ve seen plenty of research that shows we become much happier in our 50s and 60s,» says O’Malley. «We care less about what people think as we become more accepting of the rods we are on. We’re not trying to get to art exhibitions and the like because we think that’s what we should be enjoying — we just get out and do what we really enjoy. Freeing yourself from these expectations seems to be the key to happiness.»