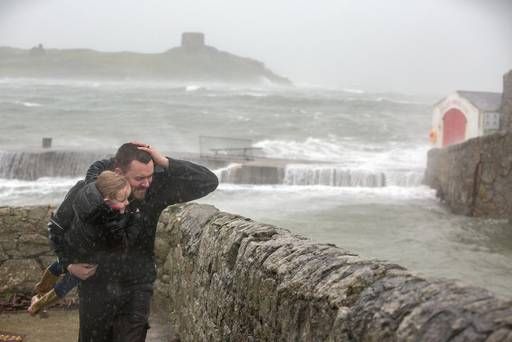 Clean-up crews will have their work cut out today as heavy rain and snow, coupled with the risk of high spring tides, are heading our way after Storm Brendan came barrelling across the country yesterday, leaving around 50,000 homes and businesses without power at its peak.

Met Éireann has warned of hazardous driving conditions this afternoon with showers of sleet and snow forecast to fall in many parts of the country.

A spokesman for ESB Networks said around 32,000 customers were still without power last night as gusts of up to 135kmh led to flight cancellations and diversions.

Driving conditions were dangerous due to downed trees and other debris on the roads – including at least three trampolines found blowing on roads and motorways in counties Limerick, Tipperary and Kildare.

Crews were hoping to restore power to affected customers – mainly in counties Wexford, Waterford and Kerry – last night where it was safe to do so. Over the course of the day, power was restored to around 100,000 customers who experienced intermittent outages.

But a Status Orange wind warning remained in place for counties Donegal, Galway, Leitrim, Mayo and Sligo until midnight last night with a second wave of strong winds – possibly dipping into Status Red – forecast to hit. Consequently power may not be restored in affected areas until later today.

Met Éireann said heavy outbreaks of rain will turn wintry in places as temperatures will reach no higher than 3C-5C.

«It will be a relatively dry and cold start to the day for most parts of the country,» said forecaster Siobhán Ryan.

«We’re then going to see rain arrive in south-west coastal areas, which will head towards the rest of the country by midday. As this is happening the rain will push against cold air. This will probably lead to sleet or wet snow.

«But on higher ground and perhaps on lower ground in some areas we might see some snow, but it will only be temporary.

«It will make for hazardous driving conditions so we would advise people to take caution,» she added.

Met Éireann forecaster Jean Byrne added that the country’s weather is to remain unsettled until Friday.

«There is, however, light at the end of the tunnel,» Ms Byrne told RTÉ Radio One’s Morning Ireland.

«Pressure is building again for the weekend.

«Today is due to be a cold day with scattered showers and spells of more persistent rain. There will be some sleet and hill snow and some heavy and possibly thundery showers. These will mostly be in Leinster and Munster.

«Later in the afternoon, we will have clearer conditions and some scattered showers which will extend from the west.»

High spring tides are expected at around 2pm today and could add to the coastal flooding that hit many areas yesterday.

However, despite the ferocious nature of Storm Brendan — which left one man trapped under a gate that blew on top of him at the height of the storm in Ennis, Co Clare — there were no reports of serious injury or death, according to the State’s emergency preparedness team.

After what Met Éireann’s head of forecasting Evelyn Cusack described as «several hours of very dangerous weather», the second named storm of the year blew out over the Irish Sea by teatime yesterday after triggering a Status Red warning in all coastal areas for a time.

Gusts of 135kmh were reported at Roche’s Point in Co Cork while winds with speeds of around 100kmh were also reported in counties Kerry and Mayo.

The storm led to a number of flight cancellations and diversions and made driving treacherous in many parts of the south and west due to fallen trees and debris.

Storm Brendan caused major disruption for commuters in Cork city and parts of Kerry and Donegal where fallen trees and other debris caused havoc on the roads.

Bus Éireann cancelled some services in counties Galway, Limerick and Mayo, with some school bus services cancelled in Co Galway leading to the closure of some schools.

While the south, west and north-west bore the brunt of Storm Brendan as it tracked across Ireland, Dublin is still at risk of coastal flooding today and early tomorrow, according to Dublin City Council.

Car parks were closed and flood barriers were set up along Clontarf, Sandymount and along the tidal reaches of the River Dodder. These will remain in place until tomorrow morning due to further high tides predicted to hit around 2pm today.

The storm also forced the temporary closure of the Department of Social Welfare Office on D’Olier Street in Dublin yesterday afternoon after strong winds blew in a window. No one was injured and the office is expected to reopen as usual today.

Extra beds for rough sleepers were made available while hostels had extended opening hours.