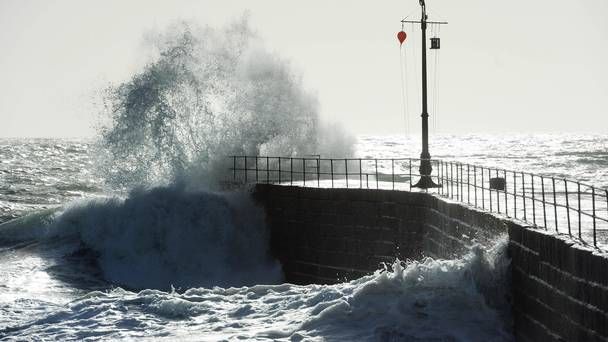 Thousands of homes and businesses are without power as Storm Brendan has made a landfall throughout the country.

ESB Networks said 48,000 homes and businesses are without power, with the southwest the worst affected area.

Crews have been deployed to restore power as quickly as possible in the affected areas and people are being urged not to approach any fallen wires, as they could be live and dangerous.

Commuters have also been told to be cautious this morning, with widespread flooding and gusts of up to 130kmh likely.

Forecasters said there was a «significant risk» of flooding along coasts due to the dangerous combination of high spring tides and a storm surge.

Local authorities in Dublin and Galway have been preparing for this by erecting flood defences and response crews are on standby, with Storm Brendan due to make landfall on the Atlantic coast at around 5am.

A Status Orange wind warning is in place for Connacht, Donegal and Kerry from 5am until 11pm. The same warning covers Leinster, Cavan, Monaghan, Clare, Cork, Limerick, Tipperary and Waterford from 8am until 3pm.

Races at Punchestown have been cancelled following a course inspection and consultations with Met Eireann. Updates on rescheduling are expected to follow.

Anyone loose a trampoline?? One found on M7 just before UL exit into #Limerick #StormBrendan #Ireland #StaySafe @MetEireann pic.twitter.com/d7HlJYvKzS

A number of flights to the UK from Shannon Airport have been cancelled, including Aer Lingus flights to London Heathrow and Edinburgh.

A spokesperson for Aer Lingus said on social media that they are «monitoring the situation at this time».

Storm Brendan approaches. Status Orange warnings in place for all counties. Status Red warning in place for all Irish coastal waters. Follow the advice of the Coastguards, Local Authorities and the Gardai. pic.twitter.com/W98XUqK9dZ

Thousands of households are without power in Cork and Kerry this morning as the storms moves across the country.

While the National Parks and Wildlife Service asked the public not to visit any of its national parks, monuments or nature reserves while the weather warnings are in place.

Head of forecasting at Met Éireann Evelyn Cusack warned that, despite wind speeds of over 130kmh being predicted, the most significant risk is of widespread flooding.

«There will be very high seas on the Atlantic coast, and this combined with a high tide and storm surge leaves a high risk of coastal flooding around all of Ireland, not just in the west.

«There is a big risk of flooding. Local authorities have been warned and are prepared,» she added.

Storm Brendan is not expected to be long-lasting, however, and by this evening its major effects should have subsided.

«The storm will begin at 5am all along the south-west, west and north-west coasts and transfer eastwards. The peak from 7am in the west and the peak in the east for Louth, Meath, Dublin, Wicklow and Wexford probably around midday to 2pm,» Ms Cusack said.

«The feature here is the high risk of flooding, but it is a storm so we’re expecting gusts of 130kmh.

«In terms of impact, it’s impossible to forecast as such, but this time of year the trees are bare, they’re not in leaf so there is a risk of trees coming down across the country.

«It will be rapidly decreasing but it will be continuing in the west and north-west, but it will all be gone by teatime on the same day.

«It’s a 12-hour event but in the north-west it could last longer.»

Homeowners and motorists have been warned to take precautionary steps as the storm sweeps across the country.

Insurance bodies said people should move cars away from trees, and ensure houses are waterproof.

Drivers should take out their insurance policies and check what they are covered for, said representative body Brokers Ireland.

And they should only travel if it is absolutely necessary. If motorists do take to the road they should be familiar with breakdown phone numbers.

Meanwhile, a Status Red marine warning is in place with winds set to reach violent storm force 11 at times along the Atlantic coast.

Dublin City Council said it had been «monitoring the forthcoming unsettled weather» and as a result had erected flood defences and closed the car parks at Clontarf and Sandymount from 6am today.

Dublin Port Company said there would be temporary closures of the Great South Wall and the North Bull Wall Bridge today and delays to some shipping activity were expected.

Galway City Council has also erected its flood defences at the Spanish Arch to protect local businesses, while the prom in Salthill will be closed today.

The Road Safety Authority urged all road users to be cautious today and to beware of objects being blown onto the road.

«Expect road conditions to change quickly in high winds so reduce your speed.

«Watch out for falling/fallen debris on the road and vehicles veering across the road,» it said in a statement.

Drivers are asked to allow extra space between themselves and cyclists and motorcyclists.