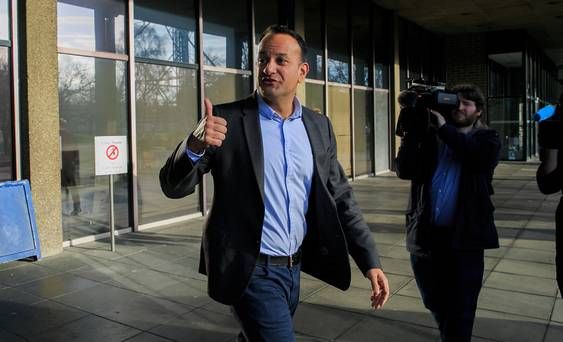 Taoiseach Leo Varadkar has told his Cabinet ministers that the general election will be held on Saturday, February 8th.

The move ends weeks of speculation about the date of the election.

By calling what is thought to be the first-ever Saturday general election in Ireland, Fine Gael is aiming to secure the votes of working families who will not be forced to take a day off to look after kids because schools are closed, as well as many students who will be able to make it home to vote.

Asked to explain the logic behind the decision, a senior Fine Gael source told Independent.ie: «Kids don’t miss school, parents don’t have to take day off, easier for students to get home.»

The Taoiseach’s plan to hold the vote on a Saturday will be a surprise to his Fine Gael colleagues as most ministers believed he would hold the election on either Friday, February 7th or 14th.

Mr Varadkar is expected to travel to Áras an Uachtaráin later today and seek the permission of President Michael D Higgins to end the 32nd Dáil and trigger a general election.

This means the election will officially start this afternoon with candidates facing a three and a half week campaign before polling day.

The Taoiseach was due to meet Fianna Fail leader Micheál Martin to discuss the election date but it remains unclear if this will go ahead.

Mr Varadkar this afternoon kicked off his campaign on social media, posting a video online showcasing his time as Taoiseach.

It opens with international news broadcasters saying his name and a caption that claims he «secured a deal to protect Ireland’s interests» in the Brexit talks.

It has a clip of Mr Varadkar on the Late Late Show in 2018 saying 20,000 homes were built that year while conceding «it’s not enough» and highlights the Rebuilding Ireland plan.

And it includes a line form his speech the day he was elected Fine Gael leader when he said: «I think if my election has shown anything if is that prejudice has no hold on this republic.»

Mr Varadkar’s election team appeared to steal a march on its rivals on Tuesday morning with posters erected in parts of Dublin West.

Sinn Féin’s candidate in the constituency, councillor Paul Donnelly, posted a picture of posters being put up on lampposts on the Navan Road. He wrote on Twitter: «The Taoiseach @LeoVaradkar team putting up posters before the Dáil has been dissolved.»

The Taoiseach’s spokesman said the early erection of posters was a matter for Fine Gael.

On Sunday, Mr Varadkar confirmed that he had decided on an election date, but he said «protocol» meant he was not announcing it yet.

Last week, he said the election will be held when «it’s the right time for the country».

«When you’re in politics, you always have to be prepared for an election, at the same time you can always be better prepared for election but that’s not what matters. What matters is when it’s the right time for the country,» he said.

However, he did say he would be holding a Cabinet meeting on Tuesday, today, and that the Dáil would return the following day.

Meanwhile, it has emerged that Fine Gael general election candidates have been asked to sign a party pledge confirming there is nothing in their “past life” they have not revealed which could bring the party into disrepute.

At a parliamentary party meeting last week, candidates signed an amended pledge confirming they had revealed any matter, including views they may have held, which could be a breach of Fine Gael’s ethos and principles.

It follows a number of controversies involving previous candidates, including Maria Bailey and Verona Murphy.

The candidates were asked to confirm they had no pending prosecutions or prior convictions other than minor road traffic offences which resulted in fines of less than €500.

They pledged they had revealed any Revenue Commissioner, Work Place Relations, Labour Court or Office of the Director of Corporate Enforcement judgments made against them. Any civil litigation taken against them or their companies was also to be revealed to the party general secretary.

In the aftermath of the Maria Bailey controversy, Taoiseach Leo Varadkar said he would be instructing all election candidates to reveal any involvement in legal proceedings.

He said he would also introduce a new party pledge which all candidates would be required to sign.

The pledge was updated this month and given to candidates last week when they met in Dublin to discuss the forthcoming general election.

It also emerged yesterday Mr Martin has signed up to a televised head-to-head election debate with the Taoiseach on Virgin Media.

However, Mr Varadkar has yet to confirm he will take on the Fianna Fáil leader in the debate being proposed by the station.

The Taoiseach’s spokesperson said Mr Varadkar was looking forward to debating Mr Martin, but would consider all debates based on their merit.

RTÉ has yet to decide if it will hold a head-to-head debate featuring the leaders of the two main parties.

Meanwhile, former Fine Gael election candidate Verona Murphy has confirmed she is set to run as an Independent candidate in the forthcoming general election.

Ms Murphy confirmed to Independent.ie that she will mount a fresh bid for the Dáil.

Her entry into the race will cause a headache for Fine Gael in the south east constituency where its two incumbent TDs, Paul Kehoe and Michael D’Arcy, are battling for re-election.

Meanwhile, Disability Minister Finian McGrath has made the shock decision not to run in the general election.

Mr McGrath has been a TD since 2002 and has run in six Dáil elections.

In a statement, Mr McGrath said he had given the matter «careful consideration» and said stepping down was the right decision for himself and his family.

«I am far from retiring and will remain involved in political activism, supporting disability issues,» he said.

«I hope to spend some time encouraging the 13pc of Ireland’s population who have some form of disability to get involved in politics at a local or nation level,» he added.

He was first elected to the Dáil in the then Dublin North Central constituency in 2002 after failing to get elected on two previous elections.

He was re-elected in the three following elections.

Mr McGrath has long been an advocate for people with disabilities before he entered politics and campaigned tirelessly on their behalf on becoming a TD.