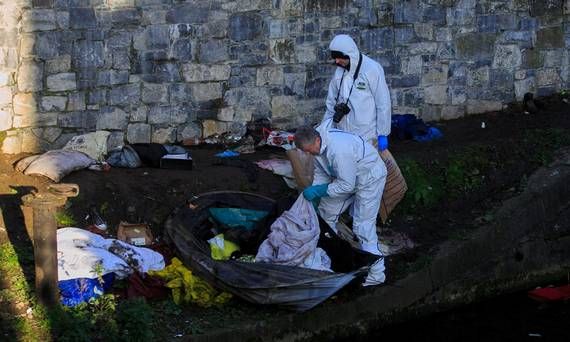 Taoiseach Leo Varadkar was last night accused of «pathetically politicising» the life-changing injuries sustained by a homeless man when authorities removed his tent from a Dublin canal bank.

Multiple investigations are under way after the man in his 30s suffered serious injuries when the tent he was sleeping in was removed by an industrial vehicle during a clean-up operation along the Grand Canal.

It is understood the tent was lifted by a lorry with a claw at the Wilton Terrace and Leeson Street junction.

Witnesses heard screaming and alerted the workmen who were unaware a man was in the tent.

The man was yesterday moved to intensive care in St Vincent’s University Hospital where he remains in a serious but stable condition.

It is believed the man may have been paralysed in his left leg, a senior source said last night.

The incident happened when Waterways Ireland, the body responsible for maintenance along the canal, was removing tents in the area.

«Somebody’s life could have been taken. Eviction notices were being issued to people living in tents along the canal, which is absolutely ludicrous. Appropriate checks clearly weren’t put in place to make sure someone wasn’t in the tent.»

The man was taken to hospital and underwent emergency surgery.

Mr Varadkar said the man had been offered accommodation in the past and would be again. But his call for Dublin’s Lord Mayor and Fianna Fáil General Election candidate Paul McAuliffe to make a statement on the matter prompted a furious reaction from the Opposition.

«The Taoiseach has stooped to a new low by trying to use this tragic event to have a pop at Paul McAuliffe,» he said. «It’s pathetic and beneath the office he holds. He has totally politicised it. He has used this tragedy as an opportunity to have a go at others. This is what they do in Fine Gael. It’s a ridiculous, outrageous politicisation and they should be ashamed of themselves.»

Mr Varadkar, who was speaking at the launch of Fine Gael’s campaign at a forklift factory in Co Monaghan, insisted he was not apportioning blame by saying Mr McAuliffe was «politically responsible» on the city council.

Last night, the Taoiseach also rejected Mr McAuliffe’s claim that his «first thought was to play a political game», insisting his initial response was to «express concern and sympathy» and that Fianna Fáil had, in fact, politicised the issue.

«I’ve never sought to make it [homelessness] a party political issue and I think if anything we’ve been on the receiving end of that rather the perpetrators of it,» he said.

Housing Minister and local TD Eoghan Murphy was also forced to respond yesterday after one of his volunteers put a campaign poster beside the scene of the incident on Tuesday afternoon. «The person who put it up feels really bad and didn’t know what had happened. As soon as I realised I sent someone over to take it down,» Mr Murphy told the Irish Independent last night.

«I was very upset by it. I was upset for the other people involved in this accident too.»

Mr Murphy said no one was politicising the matter and it was not Government policy to remove tents and homeless people from the canal.

In a statement, Dublin City Council said Waterways Ireland had been removing tents placed in a «precarious and dangerous location».

«The Dublin Regional Homeless Executive is currently liaising with the hospital and every support is being provided,» a spokesperson said.

«Our thoughts are with the man at this time.

«The executive has been engaging with the individual for some time and accommodation remains available to him.»

Waterways Ireland said it was co-operating fully with the Garda investigation.

«Waterways Ireland and Dublin City Council/Dublin Regional Homeless Executive work in co-operation to remove tents along the canals in Dublin where they have become a public safety hazard,» a Waterways spokesperson said.

«Our thoughts are very much with the individual who was injured.

«While the Garda investigation is ongoing, Waterways Ireland is obliged to not comment further.»

Waterways Ireland has previously issued notices to homeless people along the canal, warning them to remove tents and personal belongings.

In one notice, seen by the Irish Independent, Waterways said: «You are trespassing on lands which are the property of Waterways Ireland.

«Waterways Ireland calls on you to vacate these lands, together with your tents and personal belongings.

«Unless you vacate the property by the date above, we will request An Garda Síochána to take action on this matter to ensure this property is vacated.»