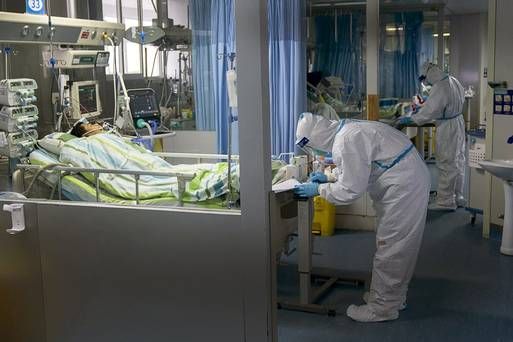 A doctor treating patients infected with the deadly coronavirus became the first medical worker to die from the disease yesterday as China intensified efforts to stop its spread.

Xi Jinping, the Chinese president, said said China was facing a «grave situation» as the spread of the virus appeared to be accelerating, with authorities racing to scale up emergency measures.

And work began on a second new hospital to be built within 14 days in Wuhan, the seat of the outbreak, as more than 1,400 cases were confirmed and the death toll rose to 42.

Most of China’s provinces and cities have activated their highest public alert, which would allow placing people in quarantine, state media reported. Travel restrictions were extended to 59 million people yesterday.

Wuhan, where the disease is thought to have broken out at a wholesale seafood and meat market, and its surrounding area are home to about 800 cases alone — though disease modelling experts estimate thousands more could be affected.

Nepal reported its first infection and Japan added a second person to its list of confirmed infections.

Liang Wudong, 62, the doctor who died yesterday morning, had come out of retirement to assist in the emergency response. Healthcare workers were particularly at risk as they were dealing with the most severely affected.

Local health officials also identified the youngest patient to date — a two-year-old girl named Zhong. She was put into isolation at hospital.

Local Chinese authorities have cancelled several public Chinese New Year events and shut popular tourist sites. In Hebei province, non-essential vehicles were this morning due to be banned in Wuhan. Starbucks joined McDonalds in shutting all its stores in the city and suspended delivery for a week. Public areas, including elevators and railway stations, were being disinfected regularly in cities across the country of 1.4 billion people. Those venturing outdoors donned face masks.

Chinese authorities said they would build a 1,300-bed hospital within two weeks, dedicated to treating coronavirus patients in Wuhan, where workers had already started work on a 1,000-bed makeshift hospital, due for completion by next Monday.

Hong Kong yesterday declared a state of emergency and announced plans to limit rail and air links to mainland China. Schools there remain closed until February 17, and universities were asked to extend leave for students beyond the Chinese New Year break.

Five cases were confirmed in Hong Kong, with another 120 people suspected of having the disease.

Experts believe controlling the outbreak may be more challenging than initially thought. A study in The Lancet suggests people could be spreading the virus without even knowing they have been infected. Prof Kwok-Yung Yuen who led the research, said: «Asymptomatic infection appears possible.» That means it would be harder for doctors and nurses to detect potentially affected individuals.

He added: «With severe acute respiratory syndrome (SARS), people were presenting with a high fever, so it was quite easy to detect and isolate people when they were most at risk to others. If we haven’t got those markers to identify people infected with the novel coronavirus, it makes it much more challenging to control.»

Chinese state broadcaster CCTV said the country would halt all group tours, at home and abroad, from tomorrow.

But the words represent a fine line. A report by infectious disease specialists at Imperial College, London said that despite this, the epidemic «represents a clear and ongoing global health threat».